The Most Expensive Watches In The Whole Wide World 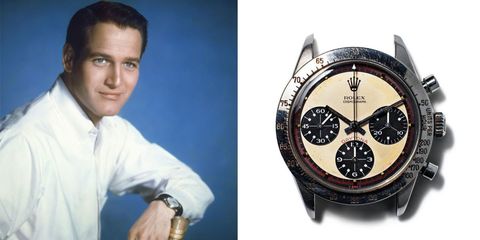 Throwing down a wad of cash on a luxury timepiece is one of the greatest indulgences a modern man can enjoy. After all, who needs a rainy day fund when you've the equivalent of a Swiss bank account on your wrist?

This month, we welcomed a new entry into a very select club: the world's most expensive watches. A one-off, 20-function Patek Philippe became the priciest wristwatch ever sold when it achieved a record-breaking sale at the OnlyWatch charity auction (you'll have to scroll down to see exactly how much it went for).

If you don't have quite that much in the savings account – or your boss won't sign off on a decade of overtime – then know that there are at least a few slightly more affordable options among the watch world's biggest price tags. Slightly being the operative word, mind.

(For the sake of fairness, we've left out all the models that are caked in bazillions of diamonds. Because that doesn't really count, does it?)

Chopard is known as one of the horological greats – and with good reason. After winning watch of the year for their ‘L.U.C Full Strike’ at the 2017 Geneva Watchmaking Grand Prix, the marque dropped a familiar (yet no less exciting) watch the following year, with a price tag to match.

The L.U.C All-in-One combines exclusivity with well-known myth. Only ten watches in each edition (rose gold and platinum) were made – but the stimulus behind them is one most people will be familiar with.

Inspired by the Roman god Janus – famed for his two faces – this watch has two dials. It also bears some godly insides, too, with features that include a perpetual calendar, astronomical readings and a tourbillon – a complex rotating mechanical system which takes great skill to make. Sure, it may set you back a hefty £374,000 (or more, depending on the exchange rate) but it’s safe to say you can’t put a price on divine power. 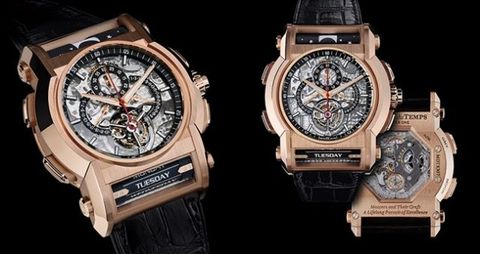 Tick-tock supremos Maîtres du Temps are famous for bringing together some of the most exceptional watchmakers in the world to collaborate on game-changing models – and the 'Chapter One Round Transparence' is the perfect example.

A mishmash of idiosyncratic design and varying schools of horology (read: watchmaking), the 'Chapter One' is both classic and complex. That's not to mention the 18k red gold case and limited edition engraving that really sets it apart (only 11 models were made).

At a wallet-demolishing £404,000, it stands out as a much sought-after tribute to the industry's fascinating past and exciting future. 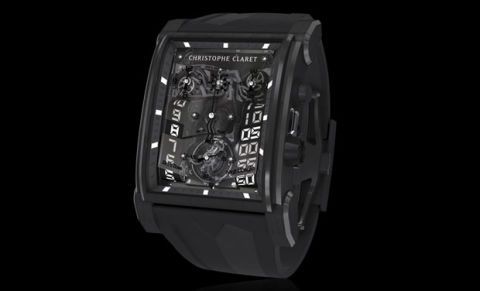 If Batman wore a watch, this would be it. Not only is it packed out with gadgetry, but it also looks moodier than a 14 year-old boy at a garden centre.

Limited to 68 pieces, the 'Night Eagle' is a modified version of the earlier 'DualTow' concept. The time is told on two revolving belts (no, not utility belts), and the movement offers a chronograph with a special planetary gear system.

It also features tourbillons (a mechanism that helps to counter the effect of gravity within the watch), a mini gong and hammer for its chime, and 65 jewels shimmering from within its dark colour scheme.

Bruce Wayne's probably reaching for his cheque book right now. This one's nice and all, but it's a little on the nose. 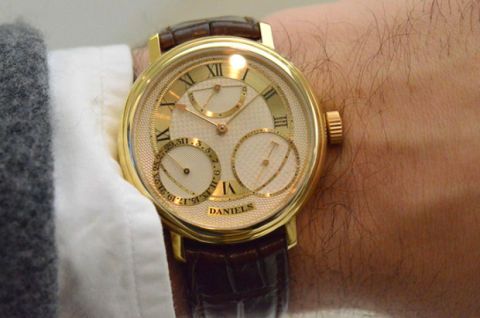 A more classic and minimalist style compared to the other pieces on this list - but why would the most important watchmaker of the 20th century need to be brash?

George Daniels only produced a few dozen timepieces within his life, but his most important contribution to the industry was the invention of the 'Co-Axial Escapement' system (which he later sold to Omega.)

It was revolutionary for a number of very geeky reasons, but most importantly it allowed for longer times between servicing. The one-of-a-kind 'George Daniel Co-Axial Chronograph' sold for $619,000 at auction in 2012, and for good reason – its a piece of bonafide history. 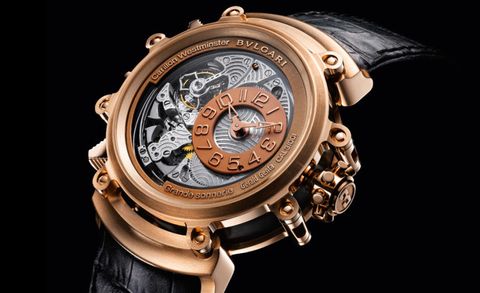 When Italian jewellery company Bulgari purchased Swiss watch brand Gerald Genta, the most celebrated (and money-spinning) result was this: the Magsonic Sonnerie Tourbillon.

It's as loud as it proud, and contains enough ultra-complicated functionality for the proper 'heads' among us, notably an array of chimes that have been enhanced by a special "magsonic" alloy (that's a special metal that supposedly enhances the sound of music, although don't throw away your AirPods just yet). 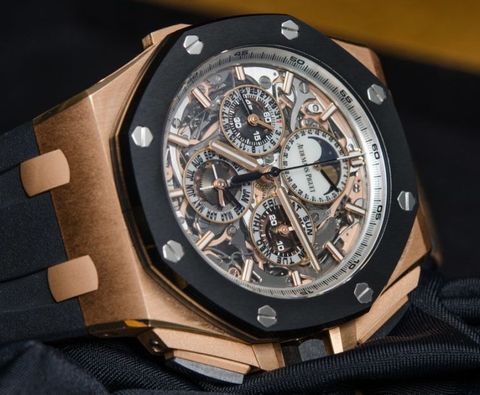 Audemars Piguet has previous when it comes to crafting head-spinning cocktails of complications (shop-talk for 'features') – in fact, it's probably been doing it longer than any existing watch manufacturer.

But the 'Grande Complication' is undoubtedly its best yet.

The fiddly insides are all hand-finished, cut-out and bead-blasted with polished bevels, and feature a matte surface underneath. This is all accompanied by a wealth of features, including split-second chronograph, perpetual calendar and a minute repeater.

And what's more, it look bloody lovely too. The titanium model will set you back more than £700k, but can you really put a price on style? (Yes. Yes you can. But it's OK to stare a little longer).

It would appear watchmakers have an appreciation for Roman culture. The Ulysse Nardin Hannibal Minute Repeater Tourbillion (that’s a mouthful) includes a motif nodding to the Hannibalic War.

However, the engraving is not the only thing that makes this watch so extravagant and expensive. Every component is hand-finished, from the main plate to the top bridge.

The watch boasts a ‘Westminster Minute Repeater’ which, if you were unaware or not a music aficionado, is no normal minute repeater. It has a unique musical system like Big Ben’s, albeit (hopefully) much quieter. With complex intricacies and a grand design, you get big thrills within a small watch, albeit at the even bigger price-tag of around £571,000 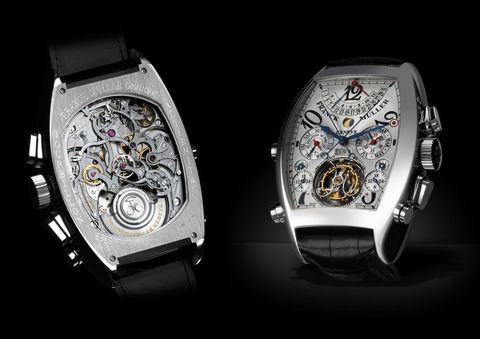 With 36 different complications, 1,483 individual components, a 1,000-year calendar and a wealth of other eclectic features, the 'Frank Muller Aeternitas' has the potential to leave you as confused as a modern polling expert.

Labelled as the "Master of Complications" by ticker aficionados, the Swiss watchmaker has managed to cram an unprecedented number of utilities into the 'MEGA 4' model, which also features a glass sapphire case back and a piece of tourbillon on the dial.

Check out this guide to its myriad functions to get an idea of just how much of a engineering feat this is.

A one-of-a-kind timepiece produced in 2013 specifically for auction, the '5004T' is the only titanium version of the beautiful-but-alas-discontinued 'Patek Philippe 5004' collection.

The Swiss watch dons caused a stir in the industry when they created the rare edition, which adopted a sportier, more colourful look than its more conservative family members. Think of it as the Fresh Prince to the '5004's Carlton.

It sold at £2,985,000 in a hotly contested auction, and has been lusted after by longing wrists ever since. 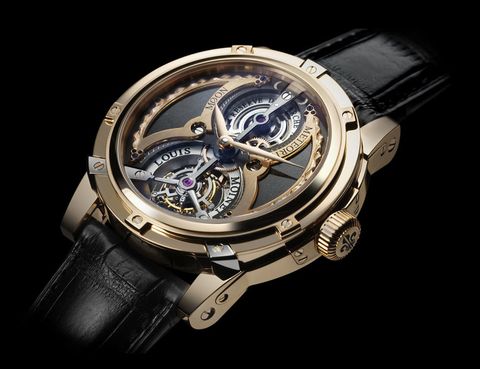 The collection – four watches in total – feature precious stones and meteorite pieces integrated into the dials. Each watch showcases a unique piece of rare space rock: for example, the 'Tourbillon Mars' includes a fragment of the Jiddat al Harasis 479 meteorite, an authentic, 180 million year-old piece of the planet Mars that fell to Earth.

So yeah: pretty special. Martian meteorites can sell for as much as $1,000 per gram – more than 15 times the price of gold. It's the closest you'll get to experiencing space, short of sharing a Virgin Galactic flight with Richard Branson. He'd probably chat your face off for the whole journey, and make you drink Virgin Cola too. Go for the watch instead.

This isn’t just a grail piece. It’s in the holiest-of-holies tier of the grail pyramid: there were only four examples of the Patek Phillipe 1518 steel ever made, and when it was introduced in 1941 it was the first watch with a perpetual calendar and chronograph. It’s an unbelievably complex, rare and historically significant piece from a very collectable maker. On pretty much every level, it’s a world-beater.

So, it’s understandable that it went for 11,002,000 Swiss Francs (£8.9 million) at auction at Phillips in Geneva, a world record for a wristwatch at auction in November 2016. Seven bidders pushed it past the Only Watch Patek Philippe 5016 which sold a year before that for 7.3 million CHF (£5.9 million).

The eponymous Rolex gifted to Paul Newman by his wife Joanne Woodward (it's engraved with the message "Drive Carefully" in reference to his love for racing) in 1968, the Paul Newman Daytona has been considered a holy grail timepiece amongst collectors and fans for decades, but even the most fervent Rolex fanboys couldn't have imagined just how much it would reach in auction.

Given a conservative price tag of £1,000,000, King Cool's everyday watch, with its black-and-creme exotic dial, was eventually sold to an undisclosed phone buyer for a brain-melting £13,500,000 — the equivalent of 9,030 2017 Rolex Daytonas. At the time, that made it the most expensive wristwatch ever made. Until...

After a five-minute bidding war, Patek Philippe's Grandmaster Chime became the most expensive wrist watch ever sold at auction, beating out the Paul Newman Rolex above.

The final cost? $31 million. But then, that might seem like value, as you're technically getting two watches for your money. Think of it as a very pricy buy-one-get-one-free offer, as the Grandmaster Chime boasts two dials (one on the back) and 20 different functions, which includes the titular chiming modes (two of which are patented).

That's a lot of watch for a lot of money, but it also raised a lot of money for a good cause – a portion of the sale will go towards research into Duchenne muscular dystrophy . 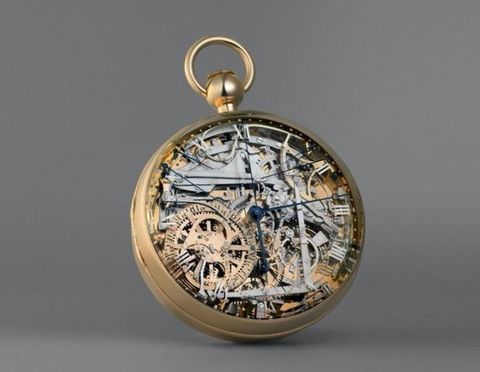 So you've found a spare 25 million nestled in the pocket of some forgotten skinny jeans, and now you're torn on how to spend it. Don't worry: we've all been there, brother.

You could do a lot worse than splash it on the 'Breguet Grande Complication Marie-Antoinette' – officially the priciest watch in the whole damn world.

Commissioned by a mysterious lover of the former French queen – and cake advocate – Marie-Antoinette, work began on the pocket watch (yeah, we're going off-piste, but just look at it) in 1782. Legendary horologist Abraham-Louis Breguet started the project, before his son finished the job in 1827.

Encased in gold, the glass showcases the intricate mechanism inside, based on the most revolutionary technologies of the time. Only the best for queeny.

Problem is, they probably spent a little too long fussing over it. As luck would have it, Mary-Antoinette was guillotined 34 years before the watch even saw light of day, or the inside of a pocket.

The watch was then stolen in the late 1900s from a museum in Jerusalem, and only re-emerged in 2007. It's now locked away in the L.A Mayer museum, waiting for you to march in with a suitcase full of fifties.